If you’re looking for an environmentally friendly, classically beautiful, budget friendly material to enhance your property, then crushed seashell may be the answer.  This material not only adds property value and curb appeal, but it’s better for the planet too. Are you considering an upgrade to your walkways or driveway? Are weeds overtaking your gardens? Do you have a high traffic area that would benefit from a walkway? If so, read on to find out more about using this versatile material.

Limiting your paved surfaces will help keep our water clean and help prevent flooding in your community. Permeable surfaces, like crushed shell, help combat the issues of surface runoff. According to the USGS Water Science School, “As watersheds are urbanized, much of the vegetation is replaced by impervious surfaces, thus reducing the area where infiltration to groundwater can occur. Thus, more stormwater runoff occurs—runoff that must be collected by extensive drainage systems that combine curbs, storm sewers, and ditches to carry stormwater runoff directly to streams. More simply, in a developed watershed, much more water arrives into a stream much more quickly, resulting in an increased likelihood of more frequent and more severe flooding.” As water travels through our streets and sewers, it picks up sediments and pollutants, which then end up in our watershed. When rainwater can quickly be absorbed into permeable surfaces, it has less of a chance to cause flooding or pollution.

Another benefit of crushed shell is that it actually feeds the soil! As the shell breaks down it adds calcium and chitins to the soil. Chitins are used to make an ingredient in many fertilizers which helps to stimulate plant growth and help with resistance to certain fungi. When used for driveways and walkways, this natural fertilization may add to that dramatic look of white shell against lush green grass. It’s also a great reason to use shells in a garden as mulch. 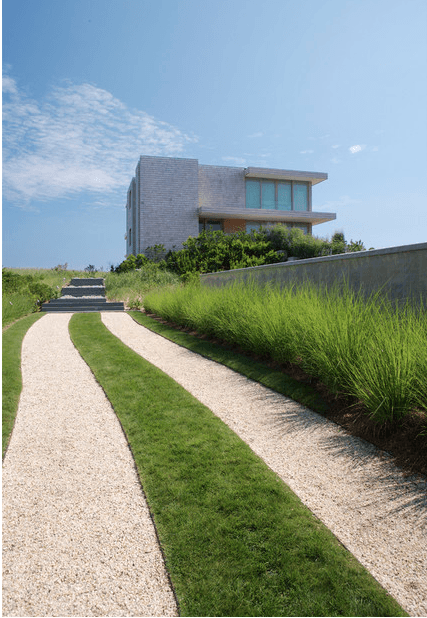 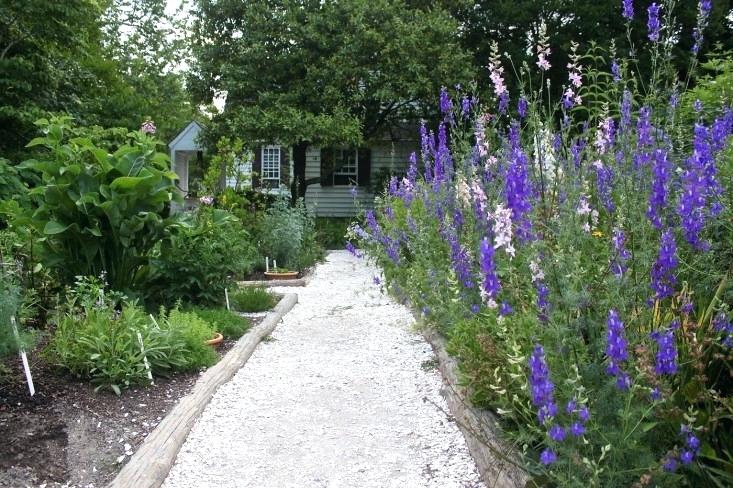 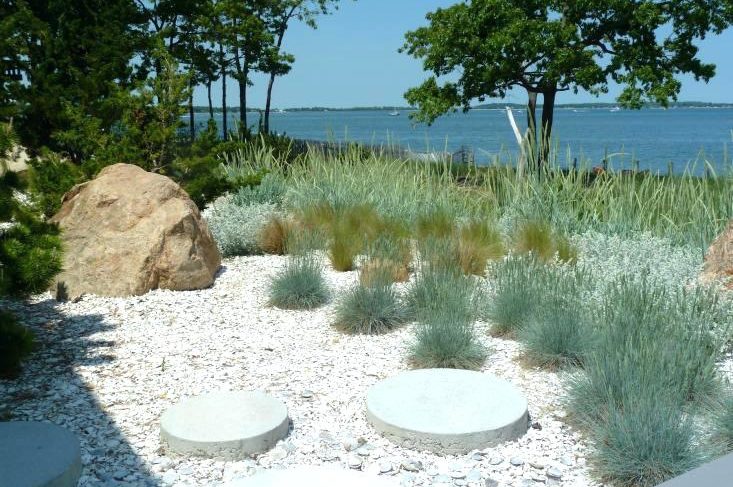 Although fairly uncommon, crushed shell as mulch is gaining popularity for obvious reasons. Not only is it better for the soil but it is a fantastic barrier against weeds. Mixing the shell with seagrasses results in an extremely low maintenance garden. Unless you have a sloped garden, shells will do fantastic. They will also keep your soil warmer than typical mulch, which is helpful in our cooler climate.

When purchased in bulk, crushed shell is comparable to gravel in price and usually less than asphalt, concrete, or stone. Less maintenance is also required since weeds are much less an issue than with gravel, it won’t crack like asphalt or concrete, and ruts won’t be an issue like with gravel or stone. You will occasionally need to fill in more shells to replenish your driveway as they breakdown.

All in all, we think crushed shell is a great alternative to use in hardscapes. Being the Ocean State, it’s only logical to use our abundant natural resources responsibly and do our part to keep the water clean. Classically beautiful and environmentally friendly; who could ask for more!?

Wonder what we’ve being working on over at Broad Rock Road? 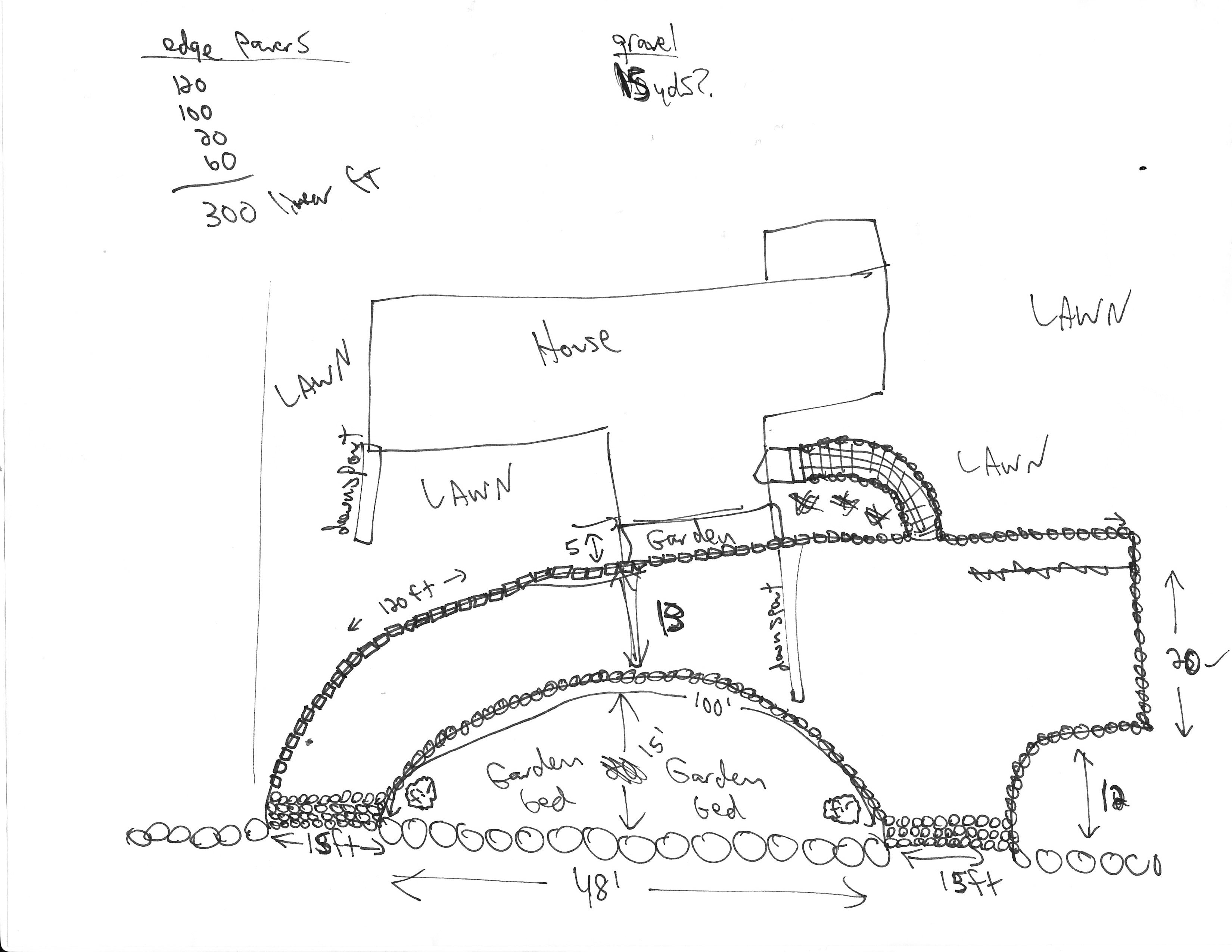 We have been working on another sea shell driveway in South Kingstown. Off of a busy road, a circular driveway would allow easier & safer entry and exit to the house. There was only one break in the stone wall, so a tractor was brought in to move the rocks to create two entries. 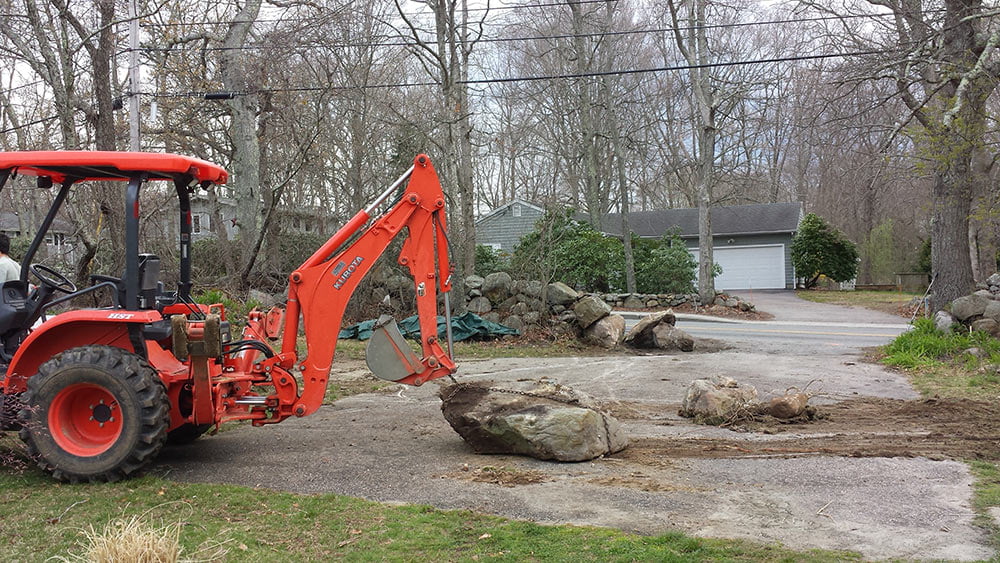 Once this was done, the entire front lawn was regraded for better drainage. 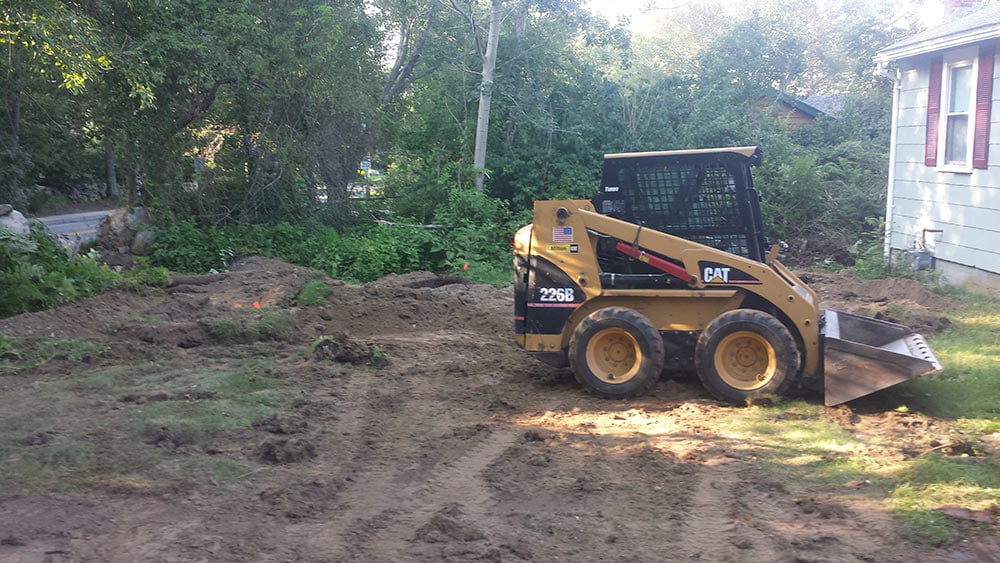 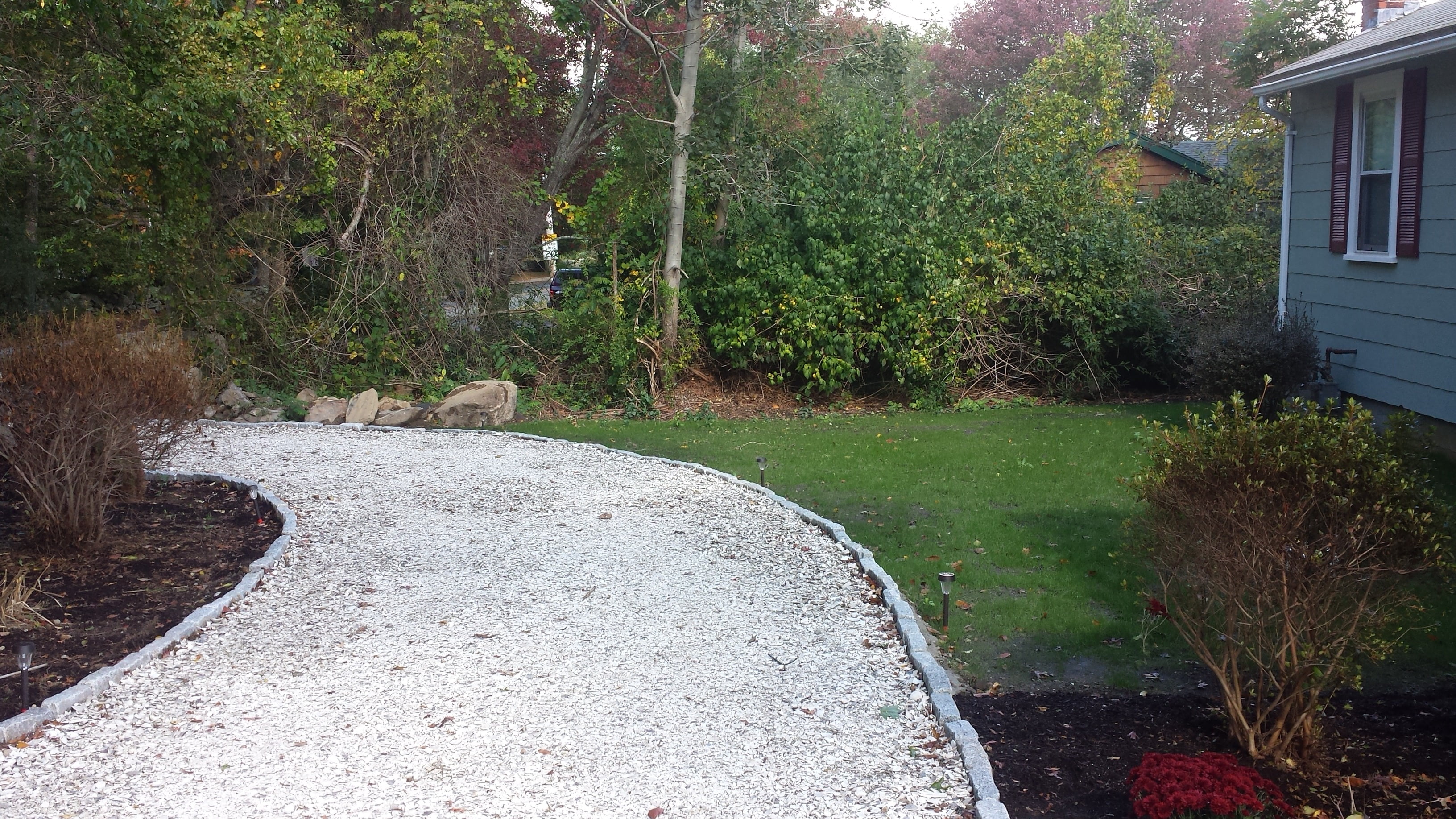 The downspouts were run underground so the water would not run over the new driveway. 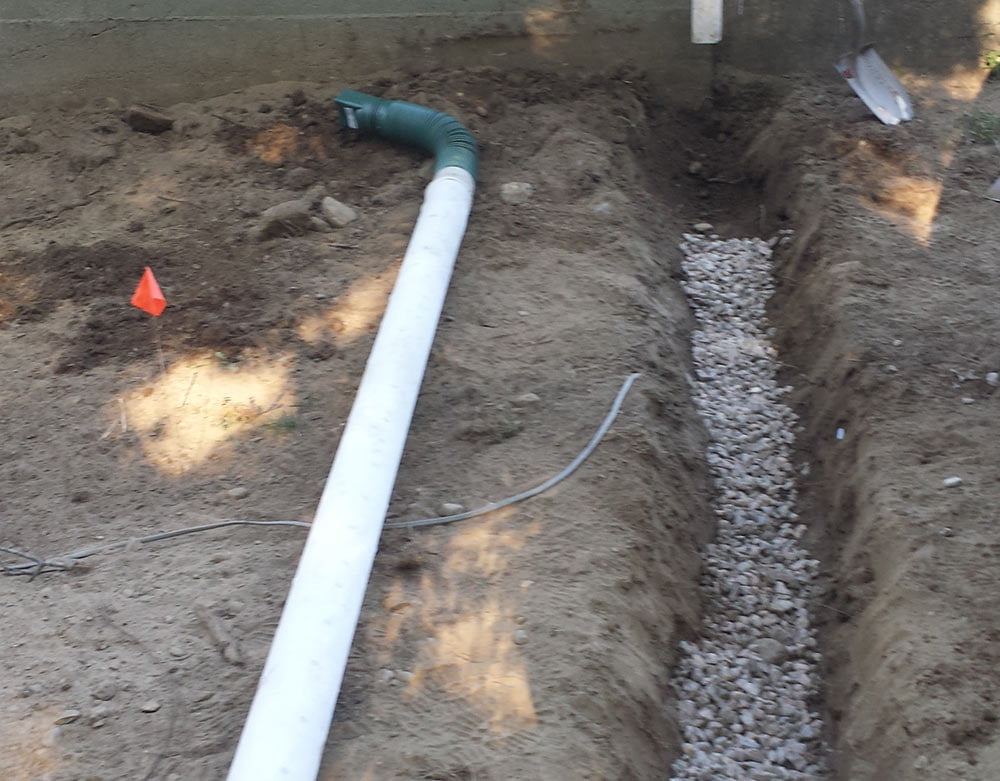 The existing asphalt driveway was removed. 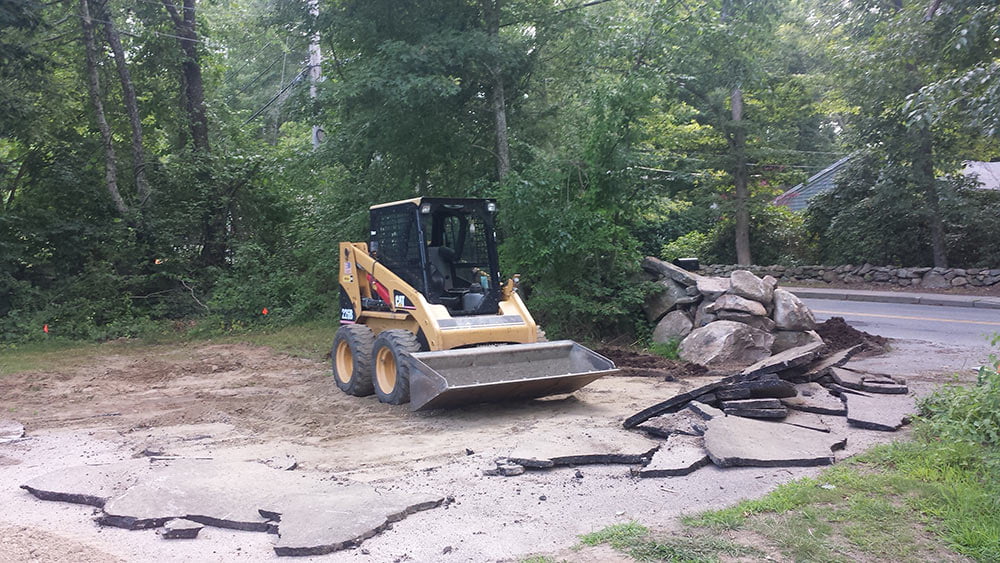 After this, processed gravel was delivered and spread as a base for the driveway so the top layer of shell would not sink into the ground. 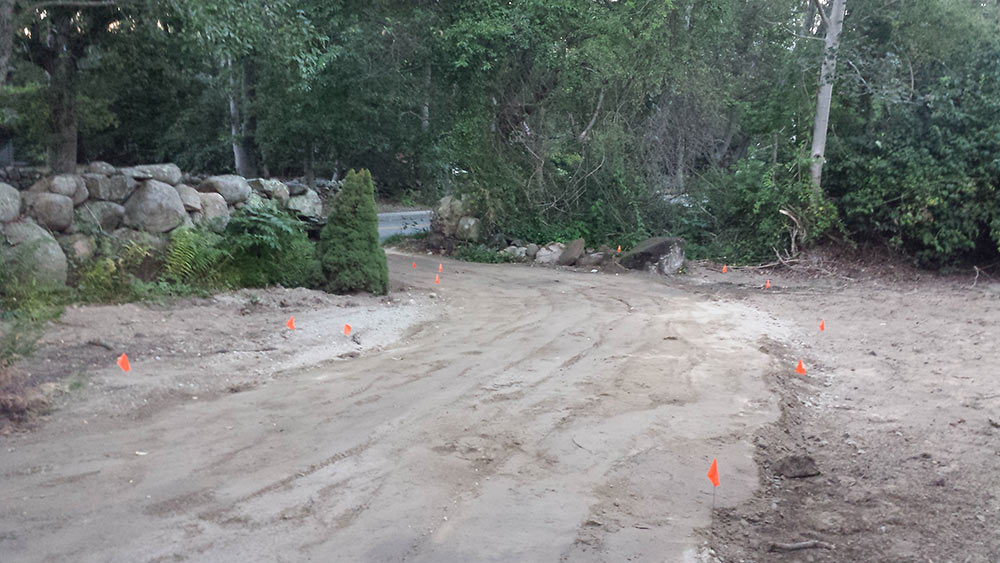 This base layer was wet down and compacted every two inches. 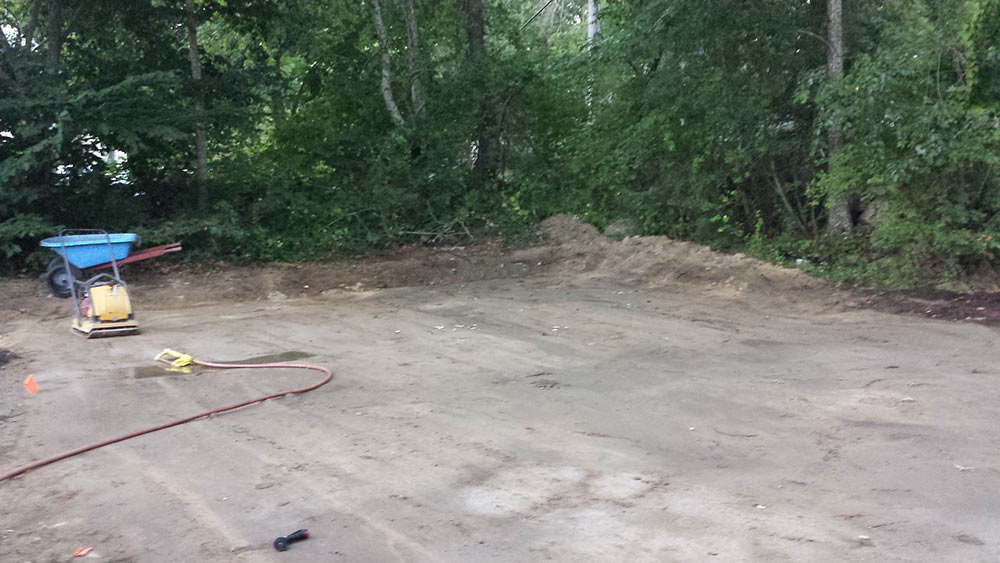 Crushed shell was delivered from Highland Farm in Wakefield and spread along the driveway. 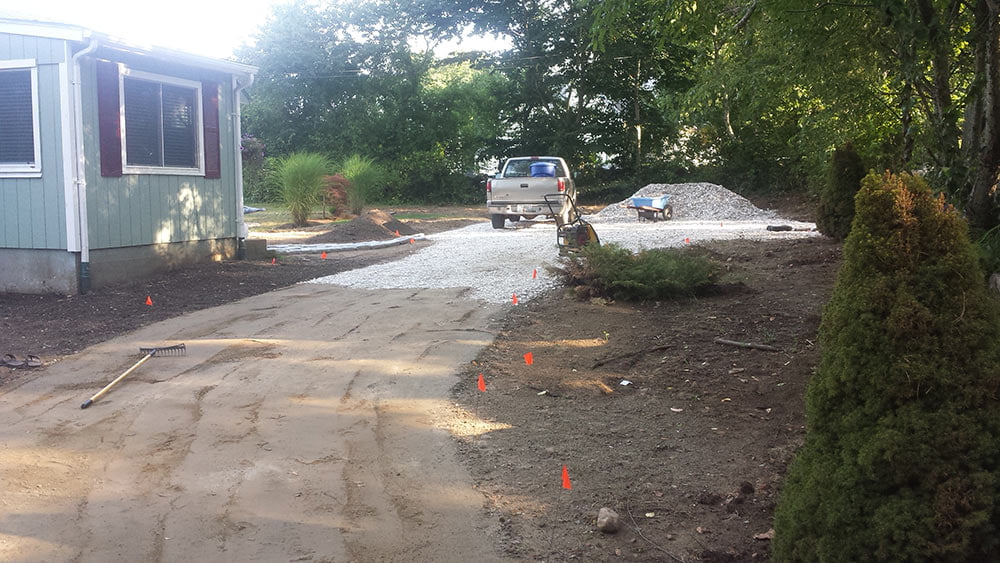 Once the shell was spread and compacted, the front walkway was created with crushed shell as well, with cobble stone edge (to be continued along the rest of the driveway at a later date), and bluestone steppers. 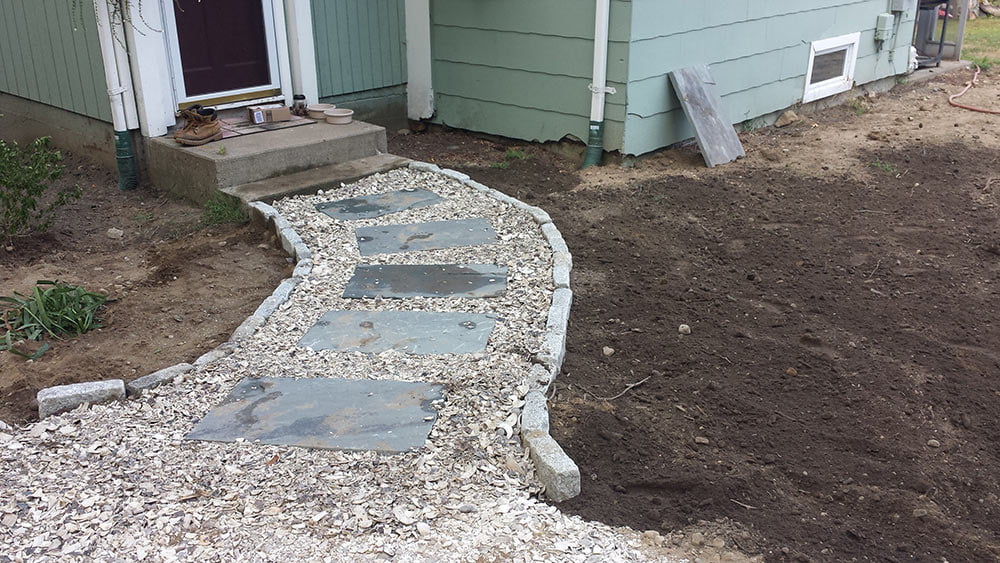 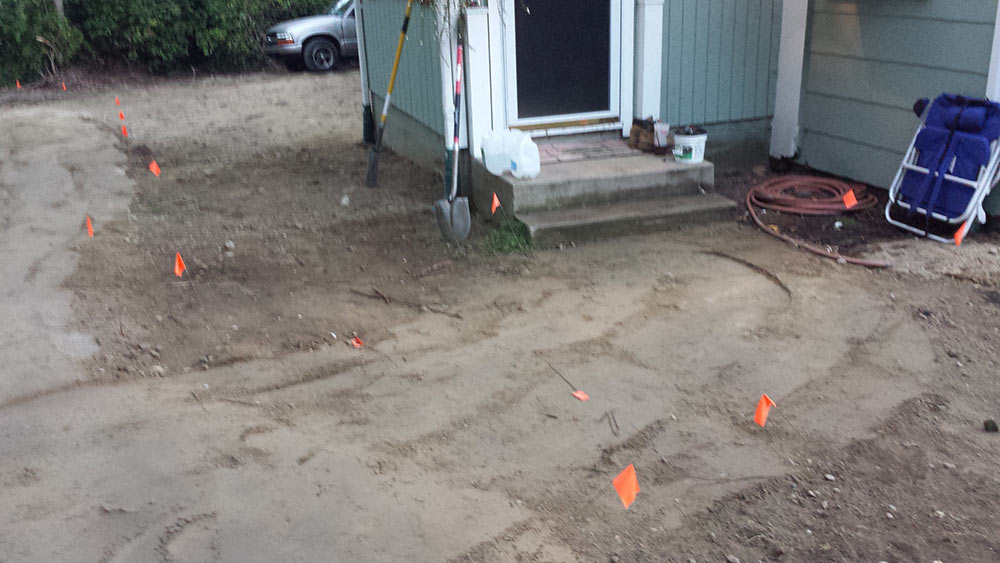 The job is still in progress, but the next steps are to bring in some top soil to seed the excavated areas, and shrubs will be planted inside the center of the driveway. The cobble stone edging will continue around the perimeter of the driveway. 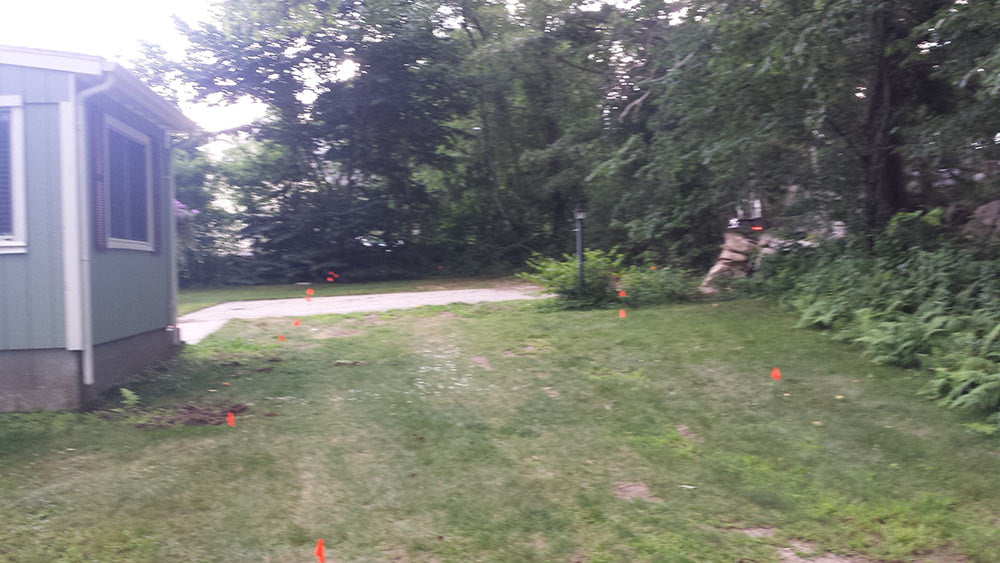 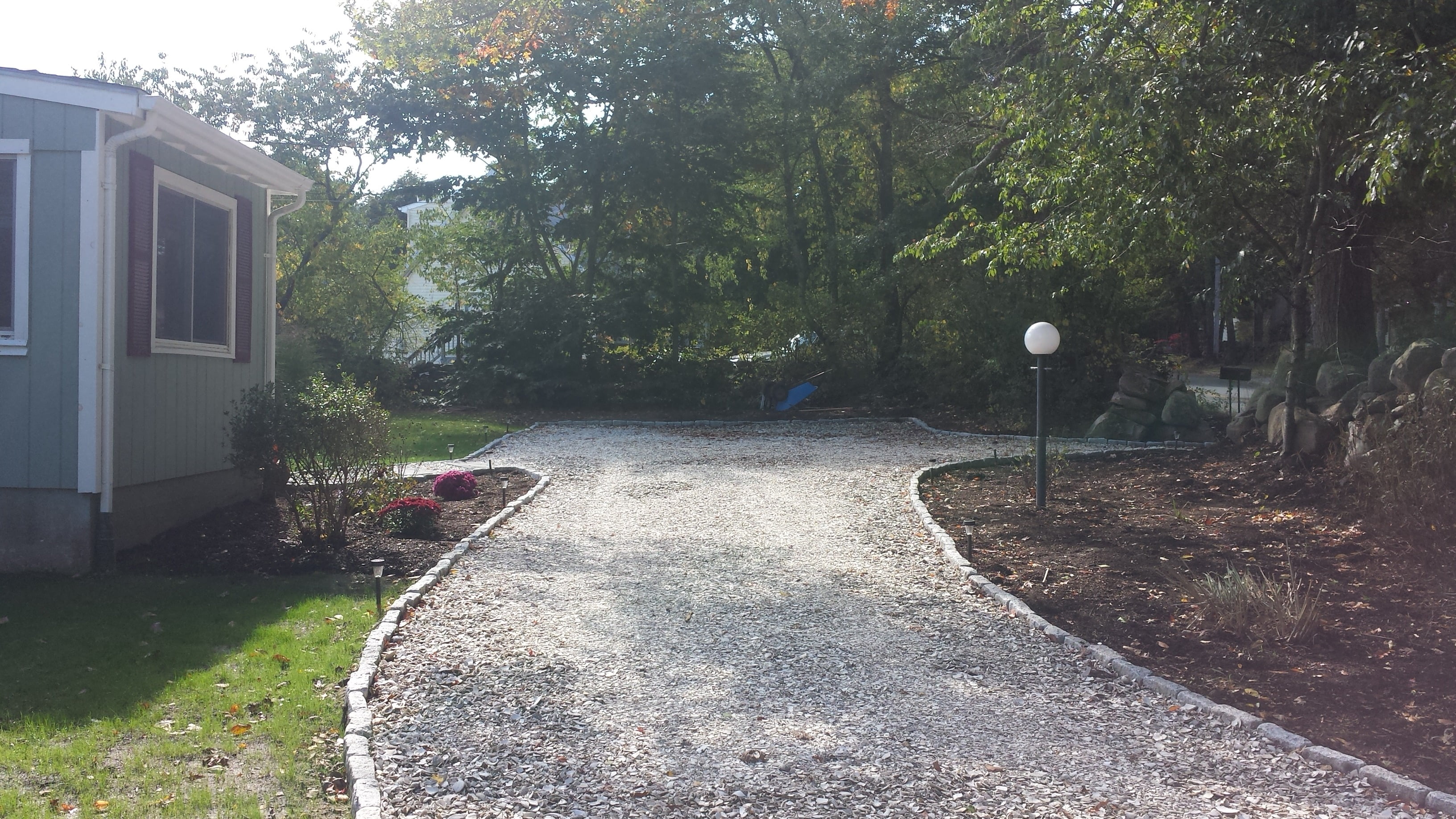 Our hardscaping team recently installed a gorgeous crushed seashell driveway with a cobblestone edge. The clients, located in a beach neighborhood, were looking for an attractive solution to their broken asphalt driveway. We thought it would be a great idea to use broken seashells for their driveway and they loved it! We installed the Cobblestone edge to prevent the spreading of the stones and incorporated curves in the design to mimic the waves in the ocean.

We started the process by excavating into the compact base and establishing a proper grade for the project. We then compacted the land again. Next, we added 6 inches of processed gravel and compacted every two inches with a steamroller. Before adding the crushed seashells, we put down a layer of geofabric. A trench was dug and the cobblestone edge was cemented in. Now that the first phase of the project is complete, we are about to start on the next phase – Finishing the apron. Stay tuned for updated photos!

Request a quote for stonework at your property here.