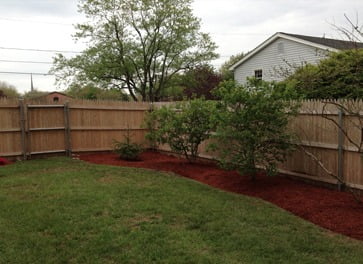 This customer wanted a complete landscaping overhaul. She was tired of her boring back yard and wanted some more color.

The client requested a barrier from the road for privacy so we installed some Arborvitaes. The client also wanted to get rid of a sickly Norway Spruce tree and create a bed to create some sort of barrier from her neighbor.

We suggested a white Cornus Kousa in its own bed and complimented it with a lone beachgreass in the corner of her yard. Later she used the bed to put wind chimes in between the two.

For along the fence, we blocked it by 4 white ‘snowball’  viburnums accented by a pink paniculate hydrangea in the middle. We transplanted the sickly Norway Spruce from the other area of the yard to the corner. On the other corner, weinstalled a Fuscia Pink Rhodendron, for a border of white and shades of pink flowers.